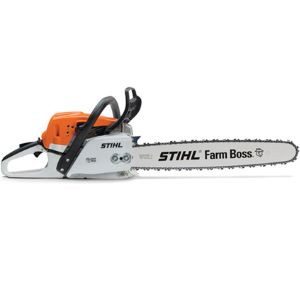 Believe it or not, the invention of the chainsaw is a long and brutal story. It is much more frightening than you probably had anticipated when you decided to read this article. Let me start off by saying the very first chainsaw was not battery operated, nor did it run on gasoline. The first chainsaw used a hand crank and looked like something out of a horror movie.

It was also not used for cutting wood. It was used to cut through bone. A man named Bernhard Heine is the godfather of the chainsaw. He was a German physician who invented the chainsaw so that he could cut bones, specifically during problematic births.

Before C-section operations were available to women, in order to save a baby who had gotten stuck in the pelvis, bone and cartilage were removed to make extra space so that the baby could be born. In the beginning, this procedure was performed by hand with a knife. And the knife was used to saw through bone without anesthesia as the woman was in the middle of giving birth. Horrible, right?

Abolishing this horrendous and painful practice, the chainsaw was created by the German doctor in 1830. He called it the osteotome, which translates roughly to English as “bone cutter.” It was used by surgeons to cut many bones before transferring to the service of woodcutters.

In the year 1861, the Hamilton Saw was first invented. This was a hand-cranked version of the chainsaw that had to be used by two men. It basically looked like a massive spinning wheel, and it was a long and brutal mission to cut down a tree with this type of saw.

20 years later in the 1880s, the American Riding Saw was invented. Of course, it was still powered by human strength – but this invention looked more like a rowing machine. The operator had to sit inside of the saw just to operate it.

It was not until sometime at the turn of the 20th century when an inventor transferred the original osteotome into a big mechanical beast that became used for logging purposes. The only problem was that this particular inventor’s chainsaw weighed hundreds of pounds and could not be operated by a person. It needed a crane just to be lifted.

As it goes, technology improved and things got better, and in 1905 a patent was granted to Samuel J. Bens for the very first chainsaw that had teeth that ran around a guide and were used to cut wood. It was titled “the endless chainsaw.”

Later, the very first portable chainsaw was patented by a Canadian man named James Shand in 1918. However, it was way too large and was not a big success.

Read More: What Size Chainsaw Do I Need – Pick The Right One!

It was in 1926 that a German mechanical engineer patented the very first electric chainsaw that was used for loggers to cut down trees. This German engineer was named Andreas Stihl, and as you can guess, he was the very first inventor of the Stihl chainsaw, which is still very popular today.

In 1929, Stihl developed the very first gas chainsaw. It is a little strange to think the electric chainsaw was actually developed before the gas chainsaw, but it is true. And while there was another engineer, who founded the Dolmar chainsaw company, beginning the development of gas chainsaws in 1927, Stihl is still recognized as the inventor of the mobile and the motorized chainsaw.

There were not many improvements made between 1930 and 1950. It wasn’t until after World War II when improvements to engine design were able to lighten chainsaws. So finally, in 1950, the very first chainsaw was invented that could be carried by a single man.

This first portable chainsaw was still very heavy, about 30 pounds or heavier, but it was put into production nonetheless and wildly popular.

Starting in 1964, the modern chainsaw continued to see advancement after advancement. The very first improvement was the anti-vibration system in 1964, which made it easier to hold the chainsaw without the intense vibration hurting the operator’s arms.

1977 saw chainsaw blades with thinner tips, and they were nicknamed banana bars. This new improvement yet again enhanced the safety of the operator by reducing kickback. And in 1982, the automatic chain brake was invented to stop the chain from spinning whenever a backward force was experienced with the blade. Again, another great safety feature.

1991 was when the automatic starting function was added. This replaced the pull cord on many units. And beyond 1991, chainsaws continued to advance until the point we are at now.

Modern chainsaws have been improved to the point where they can be ultralight, they come with all kinds of automatic features, and they are usable for everyone. Chainsaws are also no longer used to cut bones while delivering babies. This is definitely progress.

But chainsaws are still developing. We currently have a lot of battery-powered chainsaws that weigh less than 10 pounds, and that you can easily cut down a tree with. Even larger chainsaws have become more portable and easier for people to use. Chainsaws now range anywhere from 6” to 72” and can be used for simple tasks like pruning trees and tending to your property.

Where chainsaws will go in the future is anyone’s guess. It is hard to think that chainsaws could get lighter or more portable, as it seems we are at the pinnacle of electric tools. However, it could be that in the future there are laser chainsaws they can cut down trees without having to use metal teeth. Nobody knows!

Randy is a chainsaw enthusiast and an experienced lumberjack. He'll most likely be found cutting, chopping, and trimming trees, usually working with a wide variety of tools. Randy likes the outdoors and socializing with friends.

cutterlife.com is a participant in the Amazon Services LLC Associates Program, an affiliate advertising program designed to provide a means for sites to earn advertising fees by advertising and linking to amazon.com.