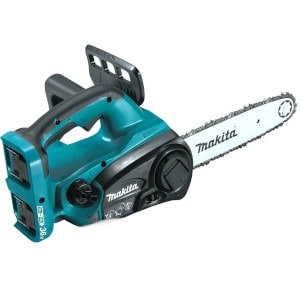 Today we are going to look at the types of chainsaws available commercially and residentially. There is no other tool for cutting wood quite as effective as the chainsaw. And while the original chainsaw was first made hundreds of years ago as a surgical tool to cut bone, today’s chainsaws can be used for a wide variety of work.

Chainsaws can make your life easier, especially when it comes to landscaping. Chainsaws are not only the things of nightmares in horror movies, but they are also great for chopping, cutting, and shaping wood with minimal effort.

Modern chainsaws come with loads of safety features, they make less noise than they used to, they are more portable, they are lighter, and they are easier to use. Most chainsaws start with a simple pull of a cord, while others are even easier because they use battery power.

What Can I Use a Chainsaw for?

You can use a chainsaw for just about anything. While you may instantly think of a chainsaw as being used for cutting down trees – and while they absolutely can cut down trees – the majority of chainsaw use is for landscaping. Chainsaws are the best tool for chopping branches off of trees, for pruning some unruly hedges, and for clearing up after a storm.

Chainsaws can be used to turn logs into lumber, to chop fallen trees into manageable pieces to be used for firewood. Chainsaws can also be used to cut those chunks of firewood into even more manageable bits for your fireplace. Anyone who runs a wood furnace needs a chainsaw.

There are several other things you can do with a chainsaw, like sculpting and woodworking. Many people use chainsaws to turn massive chunks of lumber into beautiful works of art. This is far more common than you may think, and many modern artists are using chainsaws to create interesting wooden structures and totem poles.

Also, you can use a chainsaw to make your own portable sawmill. This is called a chainsaw mill, and it is a portable piece of equipment that attaches to your chainsaw so that you can make perfectly even slabs of wood for any number of reasons. In truth, chainsaws are highly versatile and very useful.

Corded chainsaws are without a doubt the least popular option. Because these models need to be plugged into an outlet to work, they are pretty much useless for any kind of portable task. If you need to go far from a power source, these chainsaws are completely useless.

However, if you are only working in the yard, this chainsaw will work great for cutting firewood and doing other landscaping tasks. They do come with a lot of power, and so if it has an endless supply of electricity, you could theoretically use this chainsaw forever without needing to recharge a battery or refill a gas tank.

These are obviously not heavy-duty pieces of equipment, and you won’t find many people cutting down trees with a corded electric chainsaw. The most common size for this type of chainsaw is 16”, and they generally come with a 12amp motor and lots of modern features, like toolless adjustments.

Cordless chainsaws are gaining in popularity like crazy. These chainsaws are highly portable, they come in a wide range of different sizes, generally anywhere from 10” to 18”, and they can actually be pretty powerful.

With all kinds of modern advancements in battery technology, chainsaws that are battery operated are now able to do very hardcore tasks, like chopping down trees and being used in a chainsaw mill. The only big problem when using a cordless chainsaw is that you do need to eventually recharge the batteries.

Many basic units use 20V batteries, but better units use 40V or 60V batteries, and these actually last a fairly long time in the field without any need for a charge. Cordless chainsaws are generally safer than a gas chainsaw, they definitely are better for the environment, they are less noisy, and there are less complicated mechanical bits. There are no carburetors in cordless chainsaws!

If you value portability, and if you want a lightweight chainsaw that doesn’t grumble and vibrate like a mean gas unit does, you definitely want to consider picking up a cordless chainsaw. These are the best at what they do, but as of yet, they are still pretty light duty. You won’t find many massive cordless chainsaws for cutting down trees.

Big chainsaws run on gas. Gas-powered chainsaws use 2-stroke combustion engines to produce way more power than any electric unit can. Gas chainsaws are used for cutting down trees, and for lots of other really intense woodworking. While cordless units are easier for pruning and landscaping, gas chainsaws are better for serious tasks.

If you have a tree that needs to be cut down, and that tree has a diameter bigger than 20 inches, you will probably want to go with a gas chainsaw. Because they do use gasoline, these types of chainsaws emit toxic fumes, their combustion engines make quite a lot of noise, and they are generally pretty heavy.

But you do get more power when you use gasoline. You are not going to find an electric chainsaw with the kind of power a 60CC engine can make. Gasoline chainsaws can be found with bars anywhere from 16” to 72”. Yes, these chainsaws can get huge!

Randy is a chainsaw enthusiast and an experienced lumberjack. He'll most likely be found cutting, chopping, and trimming trees, usually working with a wide variety of tools. Randy likes the outdoors and socializing with friends.

cutterlife.com is a participant in the Amazon Services LLC Associates Program, an affiliate advertising program designed to provide a means for sites to earn advertising fees by advertising and linking to amazon.com.